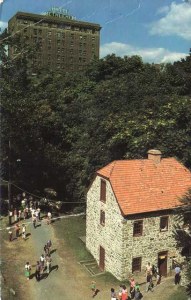 Sur cette carte postale
Bethlehem Waterworks, also known as Old Waterworks or 1762 Waterworks is a historic site in Pennsylvania significant for its age. It was declared a National Historic Landmark in 1981.It is located within "Historic Subdistrict A" near Monocacy Creek, and on the "east bank of Monocacy Creek immediately north of Hill to Hill Bridge and immediately west of Main St."It is included as part of the Bethlehem Colonial Industrial Quarter.Bethlehem became a center of heavy industry and trade during the industrial revolution. The Bethlehem Steel Corporation (1857–2003), founded and based in Bethlehem, was once the second-largest steel producer in the United States, after Pittsburgh, Pennsylvania-based U.S. Steel.