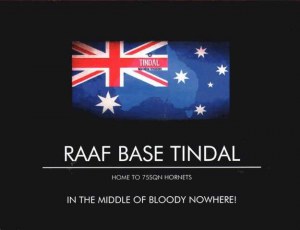 Sur cette carte postale
RAAF Base Tindal is a Royal Australian Air Force (RAAF) air base located 8 nautical miles (15 km; 9.2 mi) east southeast of the town of Katherine, Northern Territory. It is currently home to No. 75 Squadron and a number of non-flying units, and also hosts the Katherine Tindal Civilian Airport. First constructed in 1942, it was refurbished in the late 1960s as a "bare base" capable of being utilised when required. It was opened as a permanently manned RAAF base in 1989.