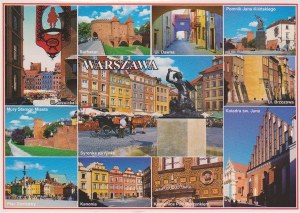 A postcard from Warsaw (Sandra)

Warsaw's name in the Polish language, Warszawa (also formerly spelled Warszewa and Warszowa), means "belonging to Warsz", Warsz being a shortened form of the masculine name of Slavic origin Warcis?aw. Folk etymology attributes the city name to a fisherman Wars and his wife Sawa. According to legend, Sawa was a mermaid living in the Vistula River who Wars fell in love with. Actually, Warsz was a 12th/13th century nobleman who owned a village located at the site of today's Mariensztat neighbourhood. The official city name in full is miasto sto?eczne Warszawa (English: "The Capital City of Warsaw"). A native or resident of Warsaw is known as a Varsovian.