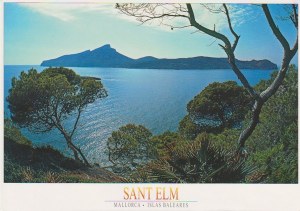 A postcard from Sant Elm (Emilia)

Mallorca (or Majorca) is an island located in the Mediterranean Sea, one of the Balearic Islands. The capital of the island, Palma, is also the capital of the autonomous community of the Balearic Islands. The Cabrera Archipelago is administratively grouped with Majorca (in the municipality of Palma). The anthem of Majorca is La Balanguera. Like the other Balearic Islands of Ibiza, Formentera and Minorca, the island is a highly popular holiday destination, particularly for tourists from Britain, Germany, Ireland and the Scandinavian countries. The name derives from Latin insula maior, "larger island"; later Maiorica, "the larger one" in comparison to Minorca, "the smaller one."