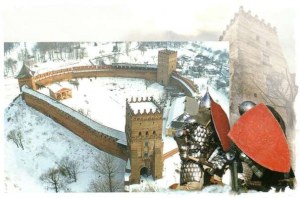 Lutsk High Castle, also known as Lubart's Castle, began its life in the mid-14th century as the fortified seat of Gediminas' son Liubartas(Lubart), the last ruler of united Galicia-Volhynia. It is the most prominent landmark of Lutsk, Ukraine and as such appears on the 200 hryvnia bill. Another city castle, built by the Czartoryski family starting from the 14th century, is now a ruin.