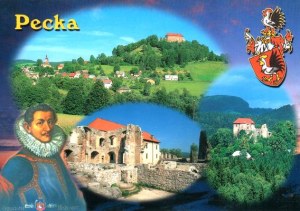 The castle was built in the early 14th century. In the course of the 15th and the 16th century the castle was rebuilt in the Renaissance Style into a comfortable four-winged, two-floored palace. The building was finished in the 17th century under the most significant owner of the castle – Christopher (Kryštof) Harant of Polžice and Bezdružice (1564 – 1621), a significant renaissance nobleman, traveller, musician, writer and politician. In 1830 the chatteau was destroyed by fire. Only in 1921, when the ruins came into the possesion of the township of Pecka, the first most important repairs were made to save at least a part of the complex.