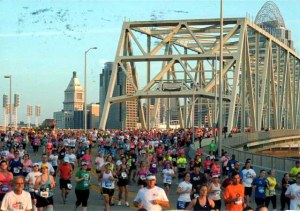 Sur cette carte postale
The Cincinnati Flying Pig Marathon is an annual 42.2 km race run the first Sunday of May in Cincinnati, Ohio. Its first run was in 1999. It is the 3rd-largest first-time marathon in the United States and had nearly 5000 finishers in 2008. An official time from the Flying Pig Marathon can be used to qualify for the Boston Marathon. In recent years, the Flying Pig has included a 5K race, a 10K race, and a half marathon in addition to the traditional marathon race. Added in 2014, there is a 2-mile "Flying Fur" event for dogs and humans to participate in. The 5K and 10K run on the day before the marathon.