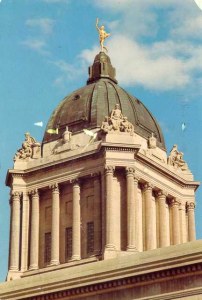 Sur cette carte postale
The Golden Boy (official name Eternal Youth) is a statue perched facing North on the dome of the Manitoba Legislative Building in Winnipeg, Manitoba, Canada, and it is arguably Manitoba's best known symbol.It stands 5.25 metres tall from the toe to the top of the torch and 4.27 metres from head to toe. It weighs 1650 kg, and the top of his torch is 77 metres above ground. The statue was purchased by the Manitoba Government from France. It was sculpted by Georges Gardet of Paris in 1918, and cast in bronze by the Barbidienne Foundry. It was placed in a ship's hold for transport to Canada. However, the ship was commandeered for service in World War I, so the statue remained in the ship's hold for the remainder of the war travelling back and forth across the Atlantic Ocean. The statue finally landed in Halifax, Nova Scotia and was shipped by train to Winnipeg where it was placed atop the Legislative Building on November 21, 1919.