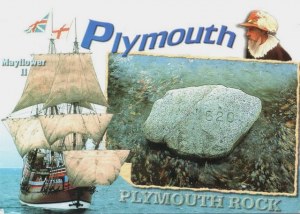 Sur cette carte postale
Plymouth Rock is the traditional site of disembarkation of William Bradford and the Mayflower Pilgrims who founded Plymouth Colony in 1620. It is an important symbol in American history. There are no contemporaneous references to the Pilgrims' landing on a rock at Plymouth, and it is not referred to in Edward Winslow's Mourt's Relation (1620–21) or in Bradford's journal Of Plymouth Plantation (1620–47). The first written reference to the rock's existence was recorded in 1715, when it is described in the town boundary records as "a great rock.". The first written reference to Pilgrims landing on a rock is found 121 years after they landed. A rock traditionally identified as the Plymouth Rock has long been memorialized on the shore of Plymouth Harbor in Plymouth, Massachusetts.