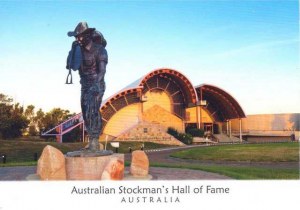 Sur cette carte postale
The Australian Stockman's Hall of Fame is a museum located in Longreach, Queensland, Australia, which pays tribute to pioneers of the Australian outback. The centre is also dedicated to Australian stockmen and Aborigines who have shown bravery and courage. The founder of the Hall of Fame was artist Hugh Sawrey, a well-known painter and former stockman, who had the name registered in 1974, put up the initial funding, and enlisted supporters. His vision was to create a memorial to the explorers, overlanders, pioneers and settlers of outback Australia. This dream was shared by other outstanding Australians, including the legendary R. M. Williams.