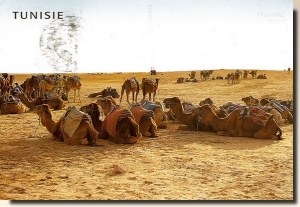 The Sahara is the world's second largest desert, after Antarctica. At over 9,400,000 square kilometres (3,630,000 sq mi), it covers most of Northern Africa, making it almost as large as Europe or the United States. The Sahara stretches from the Red Sea, including parts of the Mediterranean coasts, to the outskirts of the Atlantic Ocean. To the south, it is delimited by the Sahel, a belt of semi-arid tropical savanna that composes the northern region of central and western Sub-Saharan Africa. Some of the sand dunes can reach 180 metres (590 ft) in height.