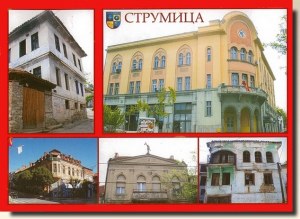 Strumica is a town situated in the south-east of the Republic of Macedonia (close to the Novo Selo-Petrich border crossing with Bulgaria). The population is close to 55,000 with an absolute Macedonian majority (90%). About 150,000 people live in the region surrounding the city. The city is named after the Strumica river which runs through it. The city of Strumica is the seat of Strumica Municipality.