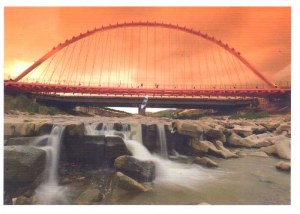 A postcard from Zhongli (Landy)

About this postcard
Zhongli District is a district in Taoyuan City, Taiwan. Zhongli is spelled variously as Jungli, Jongli, Jhongli or Chungli on railway, bus stop and road signs. Historically, the city is the site of the Zhongli Incident of 1977, the most significant event of the democratization movement prior to the 1980s. Ethnically, it is considered a kind of capital city for the Hakka Taiwanese, who live in great numbers here and in surrounding areas; many of the elderly could speak Hakka in addition to Mandarin and Taiwanese Hokkien. In recent years many foreign workers (mainly from the Philippines and Thailand) have also settled in and around the city due to the heavy industries in the suburbs of the city, making it a center for foreign laborers. The city of Zhongli has three large parks and over 70 green reserves in the city for residents of Zhongli to enjoy.