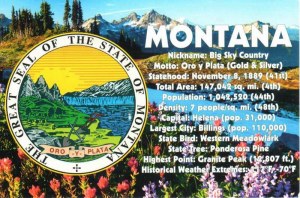 A postcard from Montana, MO (Joni)

About this postcard
The name Montana comes from the Spanish word montaña, which in turn comes from the Latin word montanea, meaning "mountain" or more broadly "mountainous country". Montaña del Norte was the name given by early Spanish explorers to the entire mountainous region of the west. The name Montana was added in 1863 to a bill by the United States House Committee on Territories (chaired at the time by James Ashley of Ohio) for the territory that would become Idaho Territory. The name was changed by representatives Henry Wilson (Massachusetts) and Benjamin F. Harding (Oregon), who complained Montana had "no meaning". When Ashley presented a bill to establish a temporary government in 1864 for a new territory to be carved out of Idaho, he again chose Montana Territory.[12] This time, Rep. Samuel Cox, also of Ohio, objected to the name. Cox complained the name was a misnomer given most of the territory was not mountainous and a Native American name would be more appropriate than a Spanish one. Other names such as Shoshone were suggested, but the Committee on Territories decided they could name it whatever they wanted, so the original name of Montana was adopted.