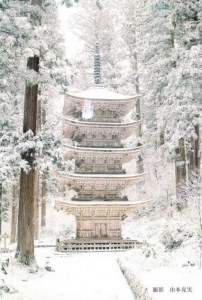 A postcard from Hokkaido

About this postcard
Mount Haguro is one of the Three Mountains of Dewa in the city of Tsuruoka, the ancient province of Dewa (a domain consisting of modern-day Yamagata Prefecture and Akita Prefecture), Japan. As the lowest of the three mountains, standing at 414 m (1,358 ft), it is the only one that is accessible throughout the year. A path of 2,446 stone steps leads to its summit amidst 600-year-old sugi trees, past the famous Gojūnotō five story pagoda, Grandpa cedar), the 1000 years old cedar tree, and numerous shrines. The steps and the pagoda are listed as National Treasures. Sanjingōsaiden shrine at the summit venerates the spirits of all three mountains. The summit can also be reached by bus service. In addition to religious pilgrims, travellers often stay at the Saikan temple lodgings.