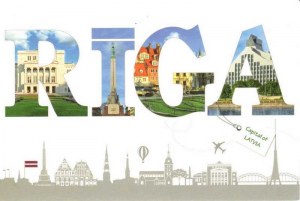 A postcard from Riga (Roberts)

About this postcard
Riga is the capital of Latvia. Being significantly larger than other cities of Latvia, Riga is the country's primate city. It is also the largest city in the three Baltic states and is home to one tenth of the three Baltic states' combined population. The city lies on the Gulf of Riga at the mouth of the Daugava river where it meets the Baltic Sea.There are numerous and speculative theories for the origin of the name Riga: It is a corrupted borrowing from the Livonian ringa meaning loop, referring to the ancient natural harbor formed by the tributary loop of the Daugava River. It could be derived from Riege, the German name for the River Rīdzene, a tributary of the Daugava.