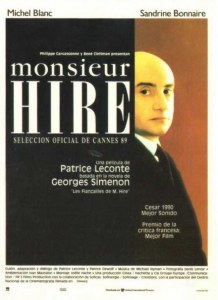 A postcard from Palencia (Cesar)

About this postcard
Monsieur Hire is a 1989 French crime drama film directed by Patrice Leconte and starring Michel Blanc in the title role and Sandrine Bonnaire as the object of Hire's affection. The film received numerous accolades as well as a glowing review from the American film critic Roger Ebert, who later added the film to his list of "Great Movies." The screenplay of the film is based on the novel Les Fiançailles de M. Hire by Georges Simenon and has original music by Michael Nyman. Simenon's novel was previously filmed in 1947 by Julien Duvivier as Panique starring Michel Simon. The film was entered in the 1989 Cannes Film Festival. It won the Prix Méliès from the French Syndicate of Cinema Critics and the award for Best Foreign Film at the 27th Guldbagge Awards.