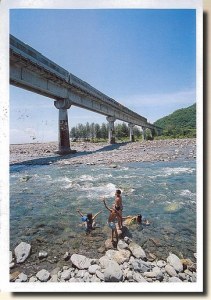 A postcard from Kaohsiung (Jou-i)

Kaohsiung is a city located in southwestern Taiwan. Kaohsiung faces the Taiwan Strait on the west. Kaohsiung, officially named Kaohsiung City, is divided into thirty-eight districts. The city is one of five special municipalities under administration of Taiwan, the Republic of China. On 25 December 2010 it merged with Kaohsiung County to form a larger municipality.