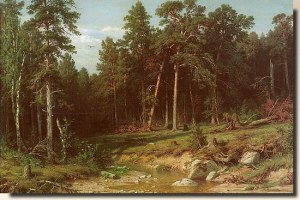 A postcard from Moscow (Alex)

Ivan Ivanovich Shishkin ( 25 January 1832-20 March 1898) was a Russian landscape painter closely associated with the Peredvizhniki movement. Shishkin was born in Yelabuga of Vyatka Governorate (today Republic of Tatarstan), and graduated from the Kazan gymnasium. Then he studied at the Moscow School of Painting, Sculpture and Architecture for 4 years, attended the Saint Petersburg Imperial Academy of Arts from 1856 to 1860,which he graduated with the highest honours and a gold medal. He received the Imperial scholarship for his further studies in Europe. Five years later Shishkin became a member of the Imperial Academy in St. Petersburg and was professor of painting from 1873 to 1898. At the same time, Shishkin headed the landscape painting class at the Highest Art School in St. Petersburg.