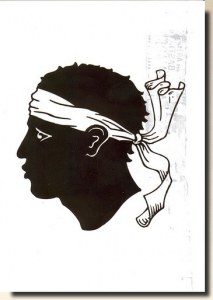 A postcard from Corsica (Corinne & Manu)

Corsica (French: La Corse) is the fourth largest island in the Mediterranean Sea (after Sicily, Sardinia, and Cyprus). It is located west of Italy, southeast of the French mainland, and north of the island of Sardinia. Corsica is one of the 26 régions of France, although strictly speaking Corsica is designated as a "territorial collectivity" (collectivité territoriale) by law. As a territorial collectivity, it enjoys greater powers than other French régions, but for the most part its status is quite similar. Corsica is referred to as a "région" in common speech, and is almost always listed among the other régions of France. Although the island is separated from the continental mainland by the Ligurian Sea and is much closer to the Italian than to the French mainland, politically Corsica is part of Metropolitan France. It was once briefly an independent Corsican Republic, until being incorporated into France in 1768. Corsica is famed as the birthplace of Napoléon Bonaparte. His ancestral home, Casa Buonaparte, is located there.