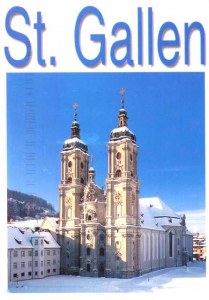 About this postcard
The Abbey of Saint Gall is a Roman Catholic religious complex in the city of St. Gallen in Switzerland of a dissolved abbey (747-1805). The Carolingian-era monastery has existed since 719 and became an independent principality between 9th and 13th centuries, and was for many centuries one of the chief Benedictine abbeys in Europe. It was founded by Saint Othmar on the spot where Saint Gall had erected his hermitage. The library at the Abbey is one of the richest medieval libraries in the world. The city of St. Gallen originated as an adjoining settlement of the abbey. Following the secularization of the abbey around 1800 the former Abbey church became a Cathedral in 1848. Since 1983 the whole remaining abbey precinct has been a UNESCO World Heritage Site.