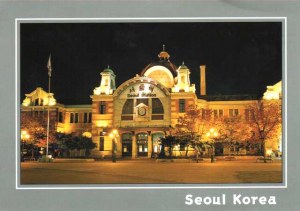 A postpostcard from Seoul (Dominique)

About this postcard
Seoul Station is a major railway station in Seoul, the capital of South Korea. The station is served by the Gyeongbu Line, its high-speed counterpart and the Gyeongui Line, with frequent high-speed, express, and local services to various points in South Korea. Line 1 and Line 4's official station name is Seoul Station's Station. The station is the primary terminus for the KTX and express services to Busan. The station is also served by about a dozen trains per day on the Honam Line and its express Gwangju Station and Mokpo. The station used to be the terminus for all long-distance trains on the Gyeongbu, Honam, Jeolla, and Janghang Lines, but in early 2004, the terminus for most Honam, Jeolla, and Janghang Line trains was moved to Yongsan.