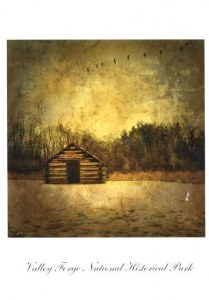 A postpostcard from Philadelphia, PA (Mr.P)

About this postcard
Valley Forge was the military camp 18 miles northwest of Philadelphia [1] where the American Continental Army spent the winter of 1777–78 during the American Revolutionary War. Starvation, disease, malnutrition, and exposure killed more than 2,500 American soldiers by the end of February 1778. General George Washington sought quarters for his men with winter almost setting in, and with greatly diminishing prospects for campaigning. Washington and his troops had fought in early December what was the last major engagement of 1777 at the Battle of White Marsh (or Edge Hill). He devised to pull his troops from their present encampment in the White Marsh area (now Fort Washington State Park) and move to a more secure location for the coming winter.