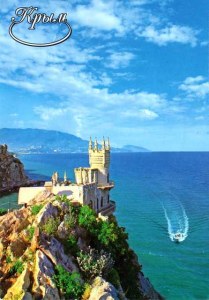 A postpostcard from Moscow (Sergey)

About this postcard
The Swallow's Nest is a decorative castle located at Gaspra, a small spa town between Yalta and Alupka, in Crimea. It was built between 1911 and 1912, on top of the 40-metre (130 ft) high Aurora Cliff, in a Neo-Gothic design by the Russian architect Leonid Sherwood for the Baltic German oil millionaire Baron von Steingel. The castle overlooks the Cape of Ai-Todor on the Black Sea coast and is located near the remains of the Roman castrum of Charax. The Swallow's Nest is one of the most popular visitor attractions in Crimea, having become the symbol of Crimea's southern coastline.