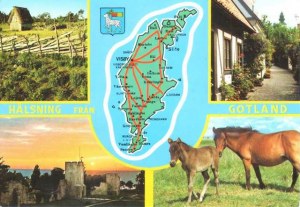 A postcard from Sweden (Hanna)

About this postcard
Gotland, Gutland in the local dialect Gutnish, is a province, county, municipality, and diocese of Sweden. It is Sweden's largest island. The province includes the small islands of Fårö and Gotska Sandön to the north, as well as the even smaller Karlsö Islands (Lilla and Stora) to the west. The population is 58,003, of which about 23,600 live in Visby, the main town. The island of Gotland and the other areas of the province of Gotland make up less than one percent of Sweden's total land area. The island's main sources of income are agriculture along with food processing, tourism, information technology services, design, and some heavy industry such as concrete production from locally mined limestone. From a military viewpoint, it occupies a strategic location in the Baltic sea.