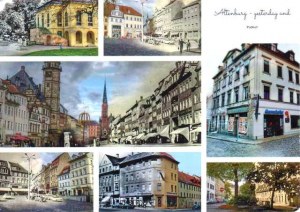 A postcard from Altenburg (Swal)

About this postcard
Altenburg is a city in Thuringia, Germany, located 40 kilometres (25 miles) south of Leipzig. Altenburg was first mentioned in 976 and later became one of the first German cities within former Slavic area, east of the Saale river (as part of the medieval Ostsiedlung movement). The emperor Frederick Barbarossa visited Altenburg several times between 1165 and 1188, hence the town is named a Barbarossa town today. Since the 17th century, Altenburg was the residence of different Ernestine duchies, of whom the Saxe-Altenburg persisted until the end of monarchy in Germany in 1918.