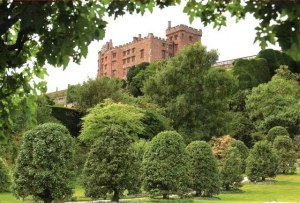 A postcard from England (Nic)

United Kingdom. In my mailbox on October 2nd, 2017

About this postcard
Powis Castle (Welsh: Castell Powys) is a medieval castle, fortress and grand country mansion near Welshpool, in Powys, Wales. It is known for housing the treasures that were brought home by Robert Clive and his son, Edward Clive from India. The Clives had collected them during their service with the British East India Company. The castle has also been known as Castell Coch, Castell Pool, Castell Pola, Castell Pole, Castell Trallwng, Red Castle, Redde Castle and Castel Cough. The seat of the Earl of Powis, the castle is known for its extensive, attractive formal gardens, terraces, parkland, deerpark and landscaped estate. The property is under the care of the National Trust. Princess Victoria (later Queen Victoria) visited the castle as a child when her mother took her to tour England and Wales in 1832.