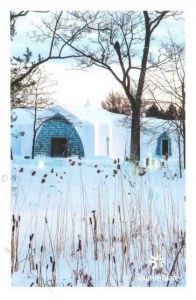 A postcard from Singapore (Daphne)

About this postcard
The Ice Hotel (French: Hôtel de Glace) near Quebec City, Quebec, Canada is the first and only true ice hotel in North America. The hotel is located 5 km north of Quebec City, on the first slopes of the Laurentian mountains, in the Charlesbourg borough. It is the first and only ice hotel in North America and is built each December for an opening date in early January. The hotel has a three-month lifespan each year before being brought down in April. It had 11 double beds when it first opened in 2001. It has now 51 double beds, all made of ice and followed by a solid wood base and comfortable mattress. When the time comes, a cozy sleeping bag, an isolating bed sheet and a pillow are delivered to the rooms. Only the bathrooms are heated and located in a separate insulated structure. It takes about a month and a half to build with 50 workers. It is built with metal frames, it is allowed to harden for a few days, and then the cranes are removed. The hotel is made of 30,000 tons of snow and 500 tons of ice and the walls are up to four feet thick.