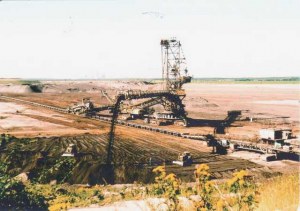 A postcard from Mannheim (Sabine)

About this postcard
A bucket-wheel excavator (BWE) is a large heavy equipment machine used in surface mining. The primary function of BWEs is to act as a continuous digging machine in large-scale open-pit mining operations, removing thousands of tons of overburden a day. What sets BWEs apart from other large-scale mining equipment, such as bucket chain excavators, is their use of a large wheel consisting of a continuous pattern of buckets used to scoop material as the wheel turns. They rank among the largest vehicles (land or sea) ever produced, and the largest of the bucket-wheel excavators (the 14,200 ton Bagger 293) still holds the Guinness World Record for the heaviest land-based vehicle ever constructed.