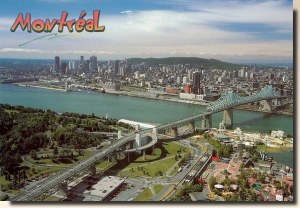 A postcard from Montreal (Louise)

Montreal is the second-largest city in Canada and the largest city in the province of Quebec. Originally called Ville-Marie, or "City of Mary", the city takes its present name from Mont-Royal, the triple-peaked hill located in the heart of the city, whose name was also initially given to the island on which the city is located, or Mont Réal as it was spelled in Middle French, (Mont Royal in present French).