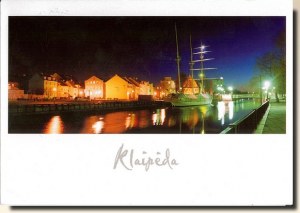 A postcard from Lietuva (AuÃƒâ€¦Ã‚Â¡ra)

Lithuania, officially the Republic of Lithuania is a country in Northern Europe, the southernmost of the three Baltic states. Situated along the southeastern shore of the Baltic Sea, it shares borders with Latvia to the north, Belarus to the southeast, Poland, and the Russian exclave of Kaliningrad to the southwest. Lithuania is a member of NATO, the Council of Europe, and the European Union. Lithuania became a full member of the Schengen Agreement on 21 December 2007. Its population is 3.6 million. Its capital and the largest city is Vilnius. In 2009, Vilnius is the European Capital of Culture and Lithuania celebrates the millennium of its name <a href="http://en.wikipedia.org/wiki/Lietuva" hreflang="en">[wikipedia]</a>. Link: <a href="http://www.travel.lt/index.php?lang=2" hreflang="en">[Official Tourism guide]</a> <img src="/upload/lietuva_distance.jpg" alt=""distance />