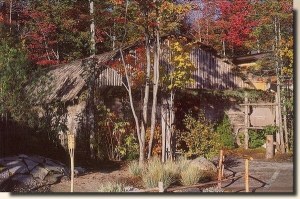 A postcard from Wendake (Corinne)

Wendake is the current name for the Huron-Wendat reserve, an enclave within Quebec City, Quebec. This was formerly known as Village-des-Hurons, or "Huron Village", and also as (Jeune)-Lorette. The Huron-Wendat of Wendake (formerly called the Hurons of Lorette) originally came from the Georgian Bay region. Until the middle of the 17th century, their ancestors occupied a vast territory straddling part of what is now the United States (from Detroit as far south as Oklahoma), south-eastern Ontario (Penetanguishene and Midland) and Quebec; they hunted and trapped throughout this territory (mainly in the Laurentian Mountains, between the central section of the St. Maurice River and the Saguenay).