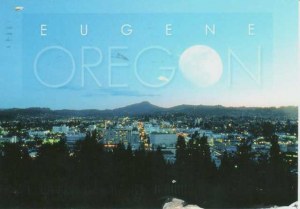 A postcard from Eugene, OR (Seth)

About this postcard
Eugene is a city in the U.S. state of Oregon, in the Pacific Northwest. It is at the southern end of the verdant Willamette Valley. Eugene is home to the University of Oregon, Northwest Christian University, and Lane Community College. Several spots within Eugene are believed to be inspiration for locations in The Simpsons. This includes Max's Tavern and the Pioneer Statue on campus. The city is also noted for its natural environment, recreational opportunities (especially bicycling, running/jogging, rafting, and kayaking), and focus on the arts. Eugene's official slogan is "A Great City for the Arts and Outdoors".It is also referred to as the "Emerald City" and as "Track Town, USA". The Nike corporation had its beginnings in Eugene.