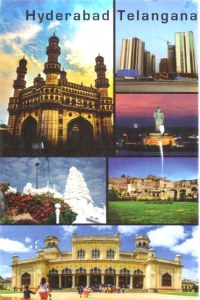 A postcard from Hyderabad

About this postcard
Hyderabad is the capital and largest city of the Indian state of Telangana and de jure capital of Andhra Pradesh. In 1591 Qutb Shahi ruler Muhammad Quli Qutb Shah established Hyderabad to extend the capital beyond the fortified Golconda. In 1687 the city was annexed by the Mughals. In 1724 Mughal governor Nizam Asaf Jah I declared his sovereignty and founded the Asaf Jahi dynasty, also known as the Nizams. Hyderabad served as the imperial capital of the Asaf Jahi from 1769 to 1948. As capital of the princely state of Hyderabad, the city housed the British Residency and cantonment until Indian independence in 1947. Hyderabad was invaded and integrated into the Indian Union in 1948 and continued as a capital of Hyderabad State (1948–56), and when the States Reorganisation Act of 1956 was introduced Hyderabad was made the capital of the united Andhra Pradesh. In 2014 Telangana state was formed after the bifurcation of Andhra Pradesh. Hyderabad City became a joint capital of the two states, a transitional arrangement scheduled to end in 2024. Since 1956, the city has housed the winter office of the President of India.