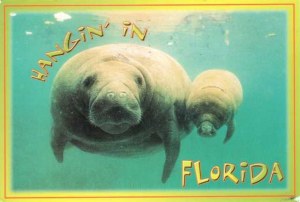 A postcard from Sarasota, FL (Charlotte)

About this postcard
Manatees are large, fully aquatic, mostly herbivorous marine mammals sometimes known as sea cows. There are three accepted living species of Trichechidae, representing three of the four living species in the order Sirenia: the Amazonian manatee (Trichechus inunguis), the West Indian manatee (Trichechus manatus), and the West African manatee (Trichechus senegalensis). They measure up to 4.0 metres (13.1 ft) long, weigh as much as 590 kilograms (1,300 lb), and have paddle-like flippers. The etymology of the name is unclear, with connections having been made to Latin manus (‘hand’), and to a word – sometimes cited as manati – used by the Taíno, a pre-Columbian people of the Caribbean, meaning "breast". Manatees' other name, sea cows, comes from the fact that they are slow plant-eaters, peaceful and similar to cows on land. They often graze on water plants in tropical seas.