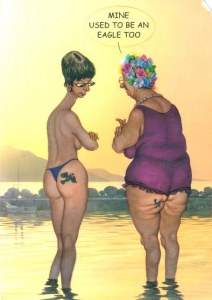 A postcard from Heerenveen (Grietje)

Netherlands. In my mailbox on December 7th, 2015

About this postcard
A tattoo is a form of body modification, made by inserting indelible ink into the dermis layer of the skin to change the pigment. The word tattoo, or tattow in the 18th century, is a loanword from the Polynesian word tatau, meaning "correct, workmanlike". The Oxford English Dictionary gives the etymology of tattoo as "In 18th c. tattaow, tattow. From Polynesian (Tahitian, Samoan, Tongan, etc.) tatau. In Marquesan, tatu." Before the importation of the Polynesian word, the practice of tattooing had been described in the West as pricking, painting, or staining. Sailors on the voyage later introduced both the word and reintroduced the concept of tattooing to Europe.