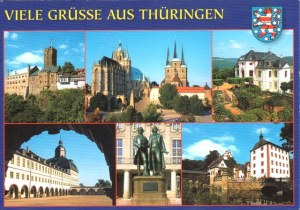 A postcard from Thuringia (Agnieszka)

About this postcard
Thuringia has been known by the nickname of "the green heart of Germany" (das grüne Herz Deutschlands) from the late 19th century, Thuringia is known in Germany for nature and winter sports. It is home to the Rennsteig, Germany's most famous hiking trail, and the winter resort of Oberhof. Germany has won more Winter Olympics gold medals than any other country in the last 20 years, and half of Germany's all-time total of 136 Winter Olympic gold medals (through the Sochi games in 2014) have been won by Thuringian athletes.