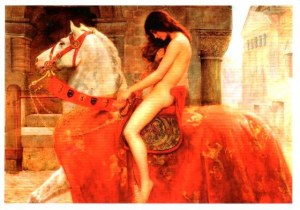 A postcard from Polotsk (Marina)

About this postcard
Godiva was an 11th-century Anglo-Saxon noblewoman who, according to a legend dating back at least to the 13th century, rode naked – only covered in her long hair – through the streets of Coventry in order to gain a remission of the oppressive taxation imposed by her husband on his tenants. The name "Peeping Tom" for a voyeur originates from later versions of this legend in which a man named Tom had watched her ride and was struck blind or dead.