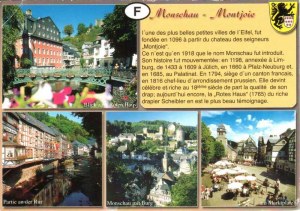 A postcard from Monschau (Bene)

About this postcard
Monschau is a small resort town in the Eifel region of western Germany, located in the Aachen district of North Rhine-Westphalia. On the heights above the city is Monschau castle, which dates back to the 13th century — the first mention of Monschau was made in 1198. Beginning in 1433, the castle was used as a seat of the dukes of Jülich. In 1543, Emperor Charles V besieged it as part of the Geldern Feud, captured it and plundered the town. However, the castle stayed with Jülich until 1609, when it became part of Palatinate-Neuburg. In 1795, the French captured the area and, under the name Montjoie, made it the capital of a canton of the Roer département. After the area became part of the Kingdom of Prussia in 1815, Monschau became the district capital of the Kreis Montjoie. During World War II the town of Monschau, sitting on a vital road network, was a point of great tactical importance in the opening phase of the Battle of the Bulge in December 1944 as the northernmost point of the battlefront.