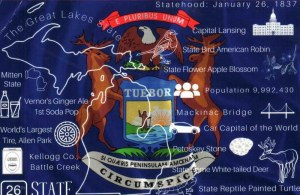 About this postcard
Michigan is a state in the Great Lakes and Upper Midwest regions of the United States. Its name comes from the Ojibwe word mishigami, meaning "large water" or "large lake". ts capital is Lansing, and its largest city is Detroit. French voyageurs and coureurs des bois explored and settled in Michigan in the 17th century. The first Europeans to reach what became Michigan were those of Étienne Brûlé's expedition in 1622. The first permanent European settlement was founded in 1668 on the site where Père Jacques Marquette established Sault Ste. Marie, Michigan, as a base for Catholic missions. Missionaries in 1671–75 founded outlying stations at Saint Ignace and Marquette. Jesuit missionaries were well received by the area's Indian populations, with few difficulties or hostilities. In 1679, Robert Cavelier, Sieur de la Salle built Fort Miami at present-day St. Joseph. In 1691, the French established a trading post and Fort St. Joseph along the St. Joseph River at the present-day city of Niles.