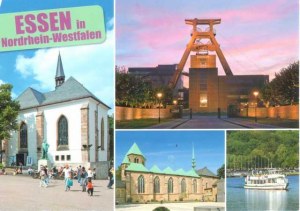 A postcard from Essen (Helga)

About this postcard
Founded around 845, Essen remained a small town within the sphere of influence of an important ecclesiastical principality (Essen Abbey) until the onset of industrialization. The city then — especially through the Krupp family iron works — became one of Germany's most important coal and steel centers. Essen, until the 1970s, attracted workers from all over the country; it was the 5th-largest city in Germany between 1929 and 1988, peaking at over 730,000 inhabitants in 1962. Following the region-wide decline of heavy industries in the last decades of the 20th century, the city has seen the development of a strong tertiary sector of the economy. The most notable witness of this Strukturwandel (structural change) is the Zollverein Coal Mine Industrial Complex, which has once been the largest of its kind in Europe. Ultimately closed in 1993, both the coking plant and the mine have been inscribed in the list of UNESCO World Heritage Sites since 2001.