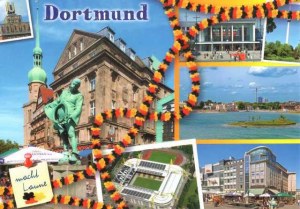 A postcard from Dortmund (Jan)

About this postcard
Founded around 882, Dortmund became an Imperial Free City. Throughout the 13th to 14th centuries, it was the "chief city" of the Rhine, Westphalia, the Netherlands Circle of the Hanseatic League. During the Thirty Years' War, the city was destroyed and decreased in significance until the onset of industrialization. The city then became one of Germany's most important coal, steel and beer centres. Dortmund consequently was one of the most heavily bombed cities in Germany during World War II. The devastating bombing raids of 12 March 1945 destroyed 230% of buildings in the inner city center. These bombing raids, with more than 1,110 aircraft, hold the record to a single target in World War II.