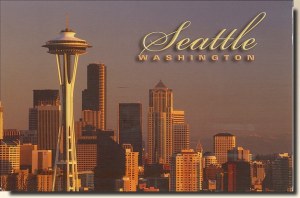 A postcard from Seattle, WA (Violet)

The Space Needle is a tower in Seattle, Washington, and is a major landmark of the Pacific Northwest region of the United States and a symbol of Seattle. Located at the Seattle Center, it was built for the 1962 World's Fair, during which time nearly 20,000 people a day used the elevators, with over 2.3 million visitors in all for the World Fair. The Space Needle is 605 feet (184 m) high at its highest point and 138 feet (42 m) wide at its widest point and weighs 9,550 tons. When it was completed it was the tallest structure west of the Mississippi River. It is built to withstand winds of up to 200 mph (320 km/h) and earthquakes of up to 9.1 magnitude. (which would protect the structure against an earthquake as powerful as the 1700 Cascadia earthquake). The tower also has 25 lightning rods on its roof to prevent lightning damage [wikipedia].