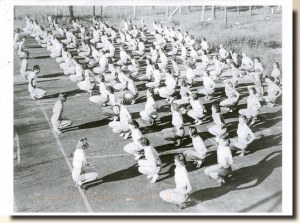 A postcard from Seattle, WA (Shelly)

America Works Out. Members of National Youth Administration doing exercises, Camp Roosevelt, Ocala, FL, c. 1933-1942 The National Youth Administration (NYA) was a New Deal agency in the United States. It operated from 1935 to 1943 as part of the Works Progress Administration. The NYA was headed by Aubrey Willis Williams, a prominent liberal from Alabama who was close to Harry Hopkins and Eleanor Roosevelt. The head of the Texas division at one point was Lyndon B. Johnson, who was later to become President of the United States [wikipedia].