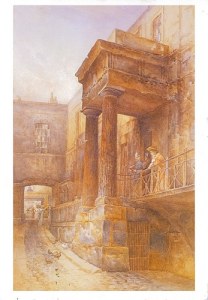 A postcard from Birmingham (Caroline)

A medium-sized market town during the medieval period, Birmingham grew to international prominence in the 18th century at the heart of the Midlands Enlightenment and subsequent Industrial Revolution, which saw the town at the forefront of worldwide developments in science, technology and economic organisation, producing a series of innovations that laid many of the foundations of modern industrial society. By 1791 it was being hailed as "the first manufacturing town in the world"