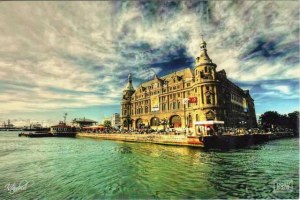 A postcard from Istanbul (Inan)

About this postcard
Istanbul Haydarpaşa Terminal or Haydarpaşa Terminus is a railway terminal in Istanbul. Until 2012 the station was a major intercity, regional and commuter rail hub as well as the busiest railway station in Turkey. Haydarpaşa, along with Sirkeci Terminal (on the other side of the Bosphorus), are Istanbul's two intercity and commuter railway terminals. As of 19 June 2013 all train service to the station has been indefinitely suspended due to the rehabilitation of the existing line for the new Marmaray commuter rail line. The station building however still houses the headquarters for District 1 of the State Railways.