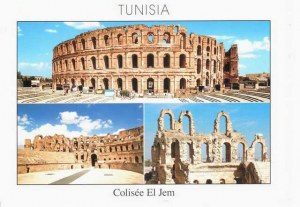 A postcard from Le Kram

About this postcard
El Djem is famous for its amphitheatre, often incorrectly called a Colosseum (roughly translated from Latin as 'that thing by the Colossus'), which is capable of seating 35,000 spectators. Only the Flavian Amphitheater in Rome (about 50,000 spectators) and the ruined theatre of Capua are larger. The amphitheatre at El Djem was built by the Romans under proconsul Gordian, who was acclaimed Emperor at Thysdrus, around 238 and was mainly used for gladiator shows and small chariot races (like in Ben-Hur).