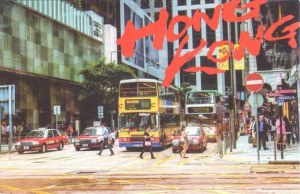 A postcard from Hong Kong

About this postcard
Hong Kong ("Fragrant Harbour" or "Incense Harbour"), officially the Hong Kong Special Administrative Region of the People's Republic of China, is an autonomous territory on the Pearl River Delta of East Asia. Macau lies across the delta to the west, and the Chinese province of Guangdong borders the territory to the north. With a total land area of 1,106 square kilometres (427 sq mi) and a population of over 7.3 million of various nationalities, it ranks as the world's fourth most densely populated sovereign state or territory.