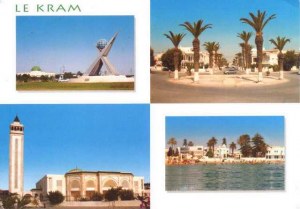 A postcard from El Kram (Mahdi)

About this postcard
El Kram is a town and commune in the Tunis Governorate of Tunisia. Situated between La Goulette, the port of Tunis, and Carthage, it opens onto the Gulf of Tunis to the east and the Lake of Tunis to the west. The original name of the city was Aga El Kram; it was Gallicised as El Kram. The word kram in Tunisian Arabic refers to a fig tree or a fruit tree in general. Professor Mohamed El Aziz Ben Achour says of the town's founder: " Mustapha Aga [...] living peacefully in his palace in the area of Carthage, in the midst of an extensive orchard with fig trees, the source of the name of the village which was established later in this location. "