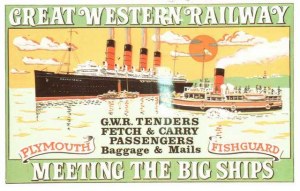 About this postcard
The Great Western Railway (GWR) was a British railway company that linked London with the southwest and west of England, the West Midlands, and most of Wales. It was founded in 1833, received its enabling Act of Parliament on 31 August 1835 and ran its first trains in 1838. It was engineered by Isambard Kingdom Brunel, who chose a broad gauge of 7 ft (2,134 mm)—later slightly widened to 7 ft 1⁄4 in (2,140 mm)—but, from 1854, a series of amalgamations saw it also operate 4 ft 8 1⁄2 in (1,435 mm) standard-gauge trains; the last broad-gauge services were operated in 1892. The GWR was the only company to keep its identity through the Railways Act 1921, which amalgamated it with the remaining independent railways within its territory, and it was finally merged at the end of 1947 when it was nationalised and became the Western Region of British Railways.